An American Adventure in Epcot, The Soul of Jazz

Sarah Domenech, Disney Parks Public Relations Manager, on a recent visit to EPCOT, relates her experience so she made sure to spend time at The American Adventure to enjoy “The Soul of Jazz: An American Adventure.”

“The Soul of Jazz: An American Adventure” exhibit
In this exhibit, Joe Gardner – the musician, mentor and teacher from “Soul” – takes you on a musical tour across the country. It celebrates the rich history of Black improvisational music in America, and highlights many different cultures, people and cities that were pivotal in the development of this special musical genre – including my hometown of San Juan, Puerto Rico! It was an extremely exciting and proud moment for me to see Puerto Rico featured as part of the exhibit, as the island has a strong and important musical history.

Another pivotal city in the development of jazz, New Orleans, was heavily influenced by its Latin neighbors to the south, including Mexico, Cuba, Brazil and Puerto Rico. From this cross-cultural exchange emerged a colorful style of jazz music, with distinctly Latin rhythms. In the jazz world, this sound is lovingly known as “the Spanish Tinge.”

Puerto Rico is home to many jazz icons, including writer, composer and trombonist Juan Tizol, as well as Tito Puente, who is often referred to as the “King of Latin Music.” I had the honor of seeing Tito Puente perform live in Puerto Rico and New York, before he passed away in 2000. Watching him and other legends inspired me to learn more about Latin jazz and gain a greater appreciation for the music genre and its importance all over the world.

“The Soul of Jazz: An American Adventure” exhibit
Walt Disney Imagineering worked closely alongside Pixar and some of the most prolific jazz historians, musicians and curators in the country to create this compelling exhibit at EPCOT. You can even discover artifacts and instruments from legendary musicians – including Louis Armstrong and Charlie Parker – while listening to a lively jazz soundtrack.

“The Soul of Jazz: An American Adventure” is included with your admission to EPCOT at Walt Disney World Resort. Disney and Pixar’s “Soul” is now streaming exclusively on Disney+, and is also now available on 4K UHD, Digital and Blu-ray. 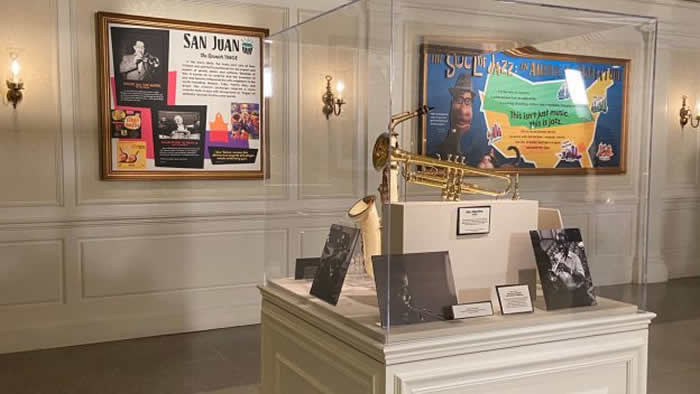