The transformation of Lower Manhattan

Lower Manhattan, already a dynamic 24/7 neighborhood and home and gateway to many of New York City’s iconic tourist destinations, is poised to undergo a remarkable transformation. Below are just 10 of the game changing projects that will come to fruition over the next several years.

WTC Site & WTC Transit Center
Excitement is palpable with the recent topping out of the new One World Trade Center. As a centerpiece of the entire World Trade Center site, this great 1,776 foot tall addition to the New York skyline not only symbolizes the aspirations, strength and resiliency of New York City, but will also feature an observation deck on its 100th foor with jaw dropping views. Along with the completed 7 WTC and buildings two, three, four, and fve expected to be fnished within the next few years, comes the Santiago Calatrava designed WTC Transit Hub. Sure to be hailed as one of the new century’s architectural marvels, this transportation complex will connect the interstate PATH train and 12 New York City subway lines. Surrounding the transit hub will be 350,000 square feet of exciting retail and dining experiences. Much of the site is expected to be completed in 2015.
www.wtc.com

National September 11 Memorial & Museum
The hauntingly beautiful and serene 9/11 Memorial already commands the attention of millions of tourists. The 9/11 Museum is being built to not only honor the memory of those who were lost during the 1993 and 2001 attacks but also those who risked their lives to save others. Demonstrating the consequences of terrorism on individual lives and its impact on communities at the local, national, and international levels, the museum will attest to the triumph of human dignity over human depravity and affrms an unwavering commitment to the fundamental value of human life. An opening is planned for 2014.
www.911memorial.org

Brookfeld Place
The World Financial Center along the Hudson River shore of Lower Manhattan has been renamed Brookfeld Place. The name change is just a small piece of a big reinvention process. Plans call for more than 40 new high-end fashion shops and 15 casual dining spots, 6 signature restaurants and a 25,000 square foot gourmet food marketplace. With rooftop views, waterfront dining and inventive arts and culture programming, Brookfeld will be bringing an incredible dynamism to downtown in the winter of 2014.
www.brookfieldplaceny.com

Pier 17 at the South Street Seaport
A popular site for visitors for many years, Pier 17 at the South Street Seaport will be experiencing a complete makeover beginning this fall. Planned by the Howard Hughes Corporation, the new glass clad building will house 365,000 square feet of destination stores, restaurants and entertainment with a special focus on local food purveyors. The new pier will also have an open rooftop overlooking the East River with unbeatable views of the Brooklyn Bridge. The pier is expected to be completed by 2015.
www.southstreetseaport.com 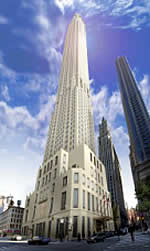 Four Seasons Hotel & Residences
Soon to be sharing a city block with the legendary Woolworth Building, the luxurious Four Seasons Hotel & Residences is making its way to Lower Manhattan. The planned 82-story skyscraper will be comprised of 185 hotel rooms and 157 luxury condos. Standing at 926 feet, it will be the tallest residential building in Lower Manhattan, and also one of the tallest buildings in New York City. The addition of this project will provide yet another overnight choice for visitors in an area already rich with hospitality options. The project is expected to be completed in 2016.
www.ramsa.com/en/projects-search/residential/four-seasons.html 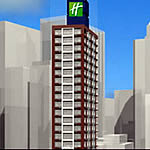 The World’s Tallest Holiday Inn
Speaking of hospitality options, the world’s tallest Holiday Inn is coming to Lower Manhattan. The new 50-story Holiday Inn tower, which is currently under construction near the World Trade Center, will stand at nearly 450 feet tall and feature over 400 hotel rooms. The tower will offer amazing views of the Manhattan sky-line, the Statue of Liberty, and the Hudson River, as well as provide the comfort, amenities, and value that Holiday Inn is known for. The project is expected to be completed in 2014.
www.ihg.com/holidayinn/hotels/us/en/reservation

Fulton Center
The new Fulton Center will serve as another vital transportation connection in Lower Manhattan. This project will enhance the connections of eleven subway lines and integrate shopping and dining into the passenger experience. Fulton Center will provide a critical east to west and river to river link in Lower Manhattan. The Center’s dramatic distinguishing feature, the “oculus,” made up of hundreds of diamond shaped panels, is designed to shed light down into the building’s multi-story space. The Center will also feature restaurants overlooking its open space, and the entire complex artfully includes the historic Corbin Building—another example of how the past meets the future in unique ways in Lower Manhattan. Fulton Center is expected to be completed by mid-2014.
www.mta.info/capital/future/fstc.php

Governor’s Island
Governors Island,a 172-acre island in the heart of New York Harbor, is only 800 yards from Lower Manhattan and one of the great outdoor experiences in New York. Governors Island is open every Saturday, Sunday and holiday Monday throughout the summer. Accessible by a free ferry, the Island is in the midst of a complete transformation. The project, which broke ground in 2012, is creating an extraordinary new park that welcomes bikers, strollers, concert goers and those who just might be seeking a unique view of Lady Liberty. The emerging park includes Liggett Terrace: a sunny, six acre plaza with public art, water features and seasonal plantings, a 10-acre Hammock Grove with 1,500 new trees and hammocks and 14 acres of open lawn with two ball felds for play. There’s also a Historic District that captures the island’s military past: 34 acres of rejuvenated landscapes with welcoming gateways and spaces for play and public programming.
www.govisland.com

Pier A
Pier A, the 127-year-old landmarked pier located at the tip of Lower Manhattan, will be beginning redevelopment later this year. The revamped New York City landmark will be home to eateries that will support local, regional food and offer a “farm-to-table and from bay-to-plate” ethos. The second foor of the Pier will include a more formal 100-seat restaurant and the third level will be a catering area that could ft about 150 people. The frst foor of the long, narrow space will be open to visitors, even those who don’t necessarily want to buy food or drink. Also planned, is a visitors area that will have information about Lower Manhattan as well as the Pier’s history, the area will include a long bar and tables, where anyone can come in and sit. There is also a planned oyster bar at the end of the frst foor overlooking the harbor.
www.h3hc.com/&fashid=462 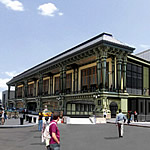 Battery Maritime Building
The Battery Maritime Building, where you catch the ferry to Governors Island, is slated for a new chapter. This Beaux-Arts beauty is the last of the city’s early 20th-century ferry buildings. A 67-room boutique hotel is slated to be built on top of the existing structure and it will offer an overnight stay like no other. Other new additions will include a 10,000 square foot rooftop restaurant and bar, a restoration of its magnificent Great Hall to public use and a catering event space.
www.dermotcompany.com/project_item.cfm?projectid=8